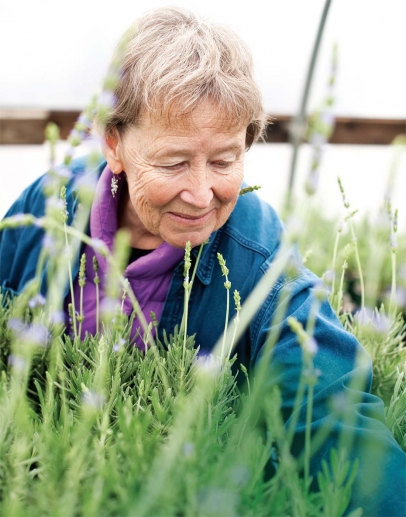 My first gardening hero was Adelma Grenier Simmons. She created an herbal empire at her Caprilands family farm in Connecticut after a goat farm, created from a failed dairy farm, didn’t pan out. It turned out, nobody doesn’t like herbs and food. Caprilands in the mid-20th century drew nearby city folks to what we now would call an organic farm and locavore eating emporium.

Her passion for herbs earned Adelma a long obituary in the New York Times in 1997 and inspired me in the 1970s to make my first garden, a geometric mass of edibles, herbs and endless handwork, a 30- by 15-foot plot crafted with railroad ties and gravel in my parents’ vacant pasture. In the same period, as I was realizing my folly of ambition, my second gardening hero was being formed in the person of Peggy Thieneman of Louisville.

Also a multigenerational agricultural entrepreneur, Peggy stands in her parents’ and grandparents’ footprints at Thieneman’s Herbs & Perennials off Taylorsville Road, near the intersection of Hurstbourne Parkway. She has put a lot of plants in my hands over the years. The jaw-dropping diversity of plants and generous tips have helped me realize what Adelma-adoration started. With my effort now scaled back to a personalized herb garden of pots on the back porch, I can indulge almost any home cooking ambitions or, more often, lift canned tomato soup and grilled cheese into food worth plating.

EARLY ON, NEVER OFF

Peggy got her start in the business at age 12. “I did painting. I did hauling,” she recalled in a recent chat at the herb greenhouse, one of 23 she and brother Kevin Thieneman operate. As she graduated through the family ranks behind her father, Joe Thieneman of Bibb lettuce and heirloom tomato (Thieneman’s Australian Heart) fame, Peggy got to work with plants. “Once you get dirt under your fingernails, it takes on a whole new life. I intend to do this until the day I die.” After 32 years of seven-day weeks prowling the narrow aisles of indoor and outdoor plants, she now tries to take off on Thursdays “so my grandchildren remember who I am.” Her retirement dream is a 15-acre farm with two or three greenhouses, maybe dwarf conifers and succulents, just to “keep a senior citizen active.“

And, she said, “I’ll keep a little studio on it and do the pots and plants.” Peggy, in her spare time, is a clay artist. 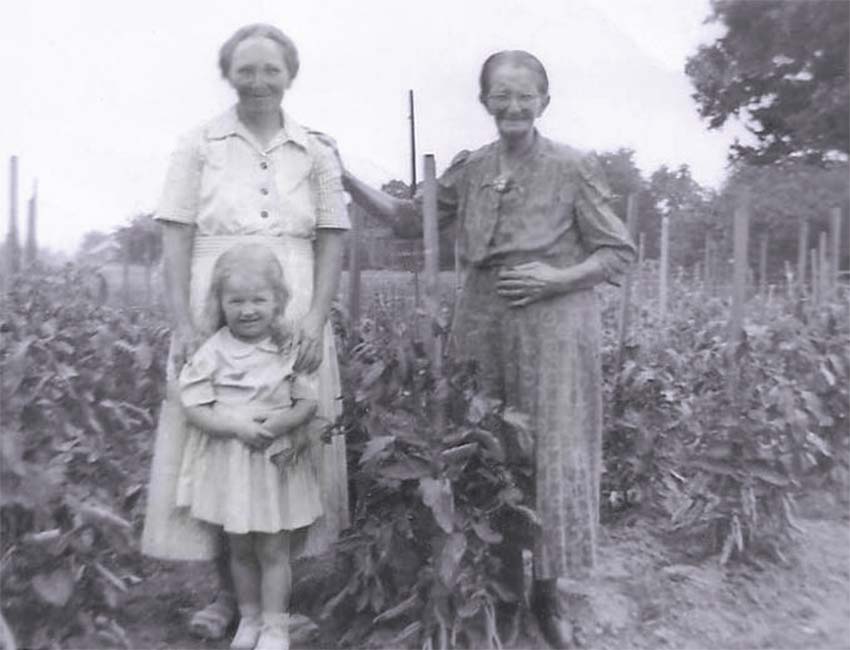 Peggy Theineman stands in front of her grandmother Thieneman and her great grandma Senn in the tomato patch on the farm along the Ohio River in Shively, circa 1952 Photo courtesy of the Theineman family

She understands that people have passions. A few years ago when she was still living in the family farmhouse at the garden center, Peggy rose from her bed at a late-night knock on the door, opened the greenhouse and sold a pot of must-have Thai basil to a culinary arts student eager to blow his fellow students at Louisville’s Sullivan University out of the water.

Thieneman’s is the Mecca of herbs in Kentucky. With nearly 200 different types and cultivars, selection can be an exercise in self-control. For instance, oregano is available in 14 types from ordinary Italian to Cuban, Russian, Puerto Rican, Greek and Sicilian, which Peggy lists as “superior for cooking.” There are 30 thymes, 20-plus basils, 14 rosemaries, 13 sages and that’s just the first 14 pages of Thieneman’s 45-page plant list, which includes succulents, scented geraniums, everlastings, ferns and perennials, and does not count the annuals and vegetable plants available in the spring. “We sell a lot of herbs,” Peggy said. “We have mountains of herbs. I know it’s more than anyone else … It’s a real slug [to the chin] to get through April and May.” That’s when the year-round staff of a dozen jumps up to maybe three dozen. She doesn’t do it all, she said. “Kevin operates the wholesale side of it, and I ride herd on the retail side of it. Wholesale is bigger than retail, about a 75/25 percentage split.”

The herb side began when she and her brother Steve were running the place and fielded a request from Farmington Historic Plantation in Louisville to grow herbs and flowers for its spring sale over the last 50 years. The historical site decided to end the event this year but continues to use only Thieneman’s herbs and plants for its formal gardens, community gardens and raised beds.

“We try to shoot for the best plants over time. It’s all about time,” she said. For some plants it can be a full year before they are ready for a new home. “What people pay for is time.”

Timing is hard for beginners to grasp on a mild March day,” Peggy noted. “We walk a fine line. We try to be honest” and still sell plants, she said, but new gardeners tend to rush the season and wind up unhappy or buy too much and get overwhelmed.

“First of all, I ask what [customers] like to eat and match an herb to that. It might be omelets. Chives go with that. It eases people into the idea.” Starting small means “they’re more likely to grow their garden.” Nine years ago Peggy started offering herb propagation classes that include keeping your starts in her greenhouse until the time is right to plant. “It started as a public service class, to help people out with cabin fever. Entertainment is what we use to scratch that itch. It’s a win-win. People invariably purchase something else.”

She refuses to sell the farm’s heirloom tomatoes and hot peppers too early. Opening day this year is April 19, firm.

“You know,” Peggy said, “I like to tell people, we have a silent partner in this business and her name is Mother Nature. She may be silent, but she always has the last word.” 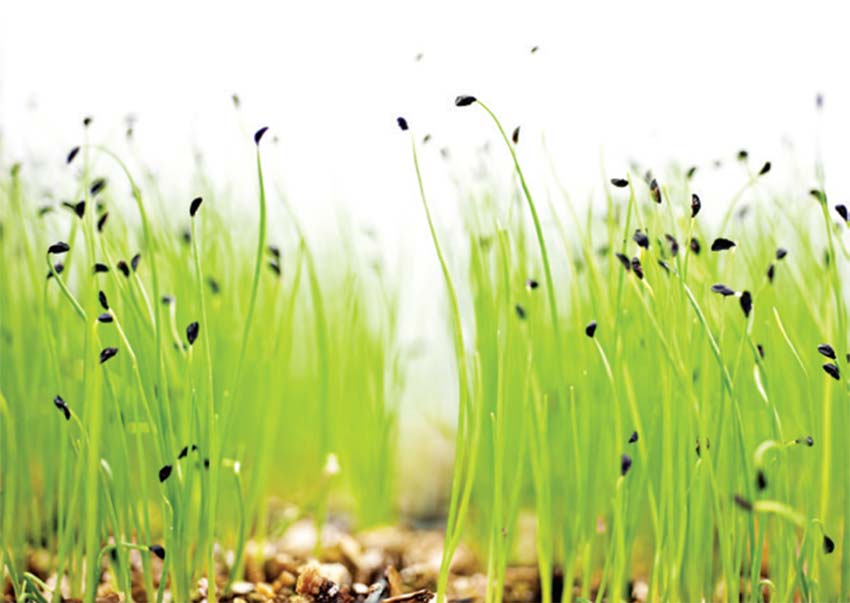 You can start many herbs yourself, but you might let the pros handle a few.

Basils are all too easy, and the unwary wind up with a glut. But one, African blue basil, will not grow from seed. If you want to keep it going, take cuttings in late summer to fall and grow them indoors until spring. It's popular because it is a small rather than shrubby basil.

Tarragon is sometimes offered as seed to the gullible, but it only grows from cuttings, dislikes heavy sun, may or may not winter over for you and, like the lavenders, needs to be re-propagated every few years.

Cilantro disappoints, Peggy said, because "you have to treat it like lettuce. Mow it down and reseed. It's never going to last all summer for you with one sowing."

Parsley germination takes a small trick. Mix the minute seed with white sand to spread it out, sow indoors in early winter, keep moist until they germinate. Once well-rooted, pot up or plant out in a clump. Do not try to tease the seedlings apart.

Most herbs do well with frequent clipping. It keeps them productive. So, no guilt. Just toss the clippings out as mulch, hen novelty food or compost.

To save a surplus you need only four techniques:

To use a surplus you need know only three recipes:

All are useful on pasta, vegetables, baked potatoes, in soups, over fish and as a side to grilled meats. They are best used immediately at room temperature, but will keep, covered, in the fridge for a week.

Sign-Up for Our Newsletter and get seasonal recipes, food stories, guides and more from EL&B

My mother used to make a winter salad of shredded carrots, hardboiled eggs and a bit of minced onion held together with mayonnaise. I like to add finely chopped parsley and pinch of sugar for a rye br...

Useful on pasta, vegetables, baked potatoes, in soups, over fish and as a side to grilled meats. Best used immediately at room temperature, but will keep, covered, in the fridge for a week.

Useful on pasta, vegetables, baked potatoes, in soups, over fish and as a side to grilled meats. Best used immediately at room temperature, but will keep, covered, in the fridge for a week.

Chimichurri is the highly addictive Argentinian pesto that, if you like cilantro, you will find yourself smearing in copious quantities on all manner of grilled meat, especially flank and sirloin stea...
Article from Edible Kentucky & Southern Indiana at https://ediblekentucky.ediblecommunities.com/shop/empress-herbs

Local, Fresh, and in your Inbox

Sign up for our newsletter and get seasonal recipes, food stories, guides and more from EL&B